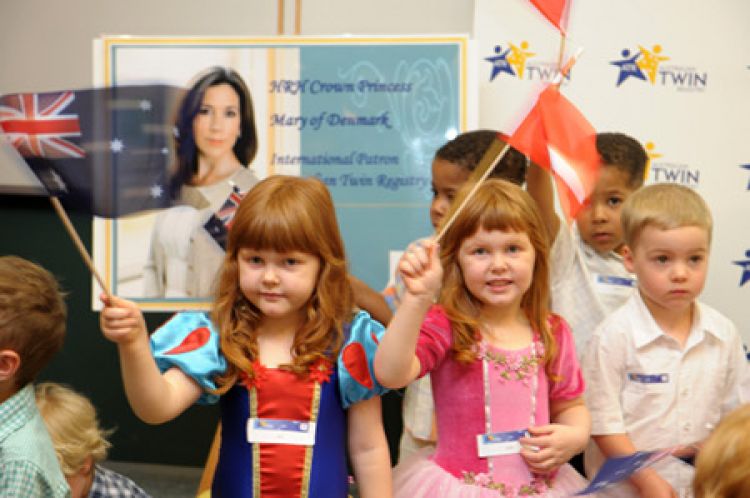 The princess and the platypus twins

There could not have been a better representative from the ATR to meet our new patron, Crown Princess Mary of Denmark, than our director, Professor John Hopper – a man who has dedicated the past 30 years of his life to twin research.

Professor Hopper travelled from Melbourne to Odense, Denmark to attend the recent twin symposium to announce the Crown Princess as the new patron of our registry as well as the Danish Twin Registry.

He says the trip was an experience of a lifetime.

As well as meeting the princess and introducing her to the work of the Australian Twin Registry, he presented her with special ‘Aussie’ gifts for her toddler twins, HRH Prince Vincent and HRH Princess Josephine, aged two.

The gift of cuddly toy twin platypuses for the royal twins had special significance.

“I explained to the princess that Healesville Sanctuary near Melbourne is undertaking a special twin study of platypuses as part of its breeding program. The sanctuary has found that twin platypuses, also called a puggle, are common in the wild but uncommon in places of captivity such as zoos - and it would like to understand why.

“It seems we can learn much from twins in the animal as well as the human world. These twin platypuses have a special relationship with the ATR – hence my choice of gifts for the princess’s twins.”

He says the Crown Princess is excited to be supporting twin research and she has questions similar to any mother of twins e.g. whether twins should be separated or kept together in class at school.

“She was amazed by the extent of twin research happening around the world and is looking forward to supporting our work.”

The Crown Princess is excited to be supporting twin research and she has questions similar to any mother of twins e.g. whether twins should be separated or kept together in class at school.

Photo:Professor Hopper presented twin platypuses to the Crown Princess as gifts for her twins when he met her in Denmark at her first official outing as ATR patron.