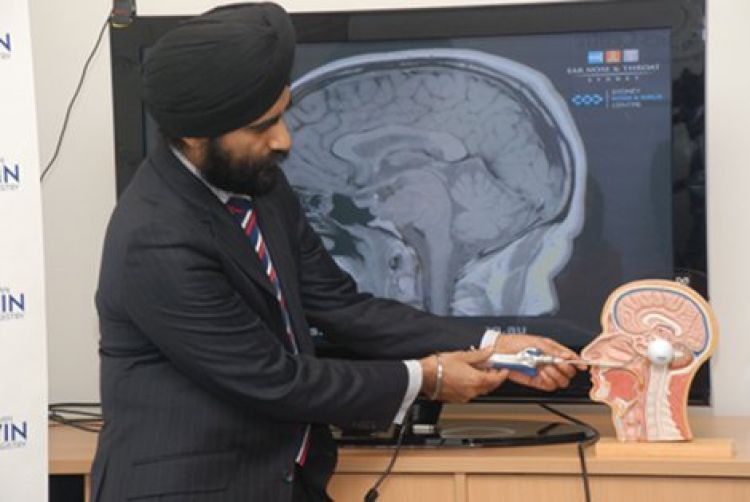 Identical twin brothers, Craig and Brenton Gurney, were inseparable as little boys and have remained very close into their adult lives. But these close bonds are now being tested with one of the pair battling an extremely rare form of cancer.

While Craig, 38, has undergone treatment for a clival chordoma, a rare type of bone cancer that forms a brain tumour in the skull base, his twin Brenton has been with him every step of the way.

Their story is the more extraordinary as it was Brenton who was concerned at first that he may have a brain tumour because of constant headaches. Brenton decided to join a twin research study which involved undertaking a brain MRI and he asked Craig to come along too as twin pairs were needed for the study.

The results showed the all-clear for Brenton but, shockingly, led to the discovery of a tumour at the base of Craig’s skull. According to Brenton, his first thought was “it should have been me”.

But as fate would have it, Brenton’s headaches and determination to seek out the brain MRI probably saved Craig’s life.

He is now back at work as a retail manager and has just welcomed the birth of his third child with wife, Nicole.

“It’s been an emotional roller-coaster ride, dealing with the cancer,” says Craig. “Up to then I was a really active person and never had any health problems.

“But I’m now at a stage that I can embrace some ‘positives’ from the whole experience,” he says. “The generosity and goodwill of people have been amazing. This has brought my family, friends, local community, and colleagues closer together.”

According to the twins, Craig’s illness has reinforced to them the importance of giving back to the community.

“I found out about my tumour when I was volunteering with the Australian Twin Registry,” Craig explains. “I thought I was participating in a research study as a way of helping others but, as it turned out, it probably saved my life.”

Craig and Brenton urge twins to become involved in the registry and twin studies. “As twins, we have something special that we can use to help others. You could potentially save a life – and it may be your own – by becoming involved,” says Craig.

“I’ve learnt that when you have a chance to make a difference, you should take it as it doesn’t come around very often in your life.”

Read the fully story of Craig’s journey with cancer and his close connection with his twin, Brenton, here. Craig’s tumour was discovered while participating in a twin brain study – read more about this study here.

As twins, we have something special that we can use to help others. You could potentially save a life – and it may be your own – by becoming involved in research.