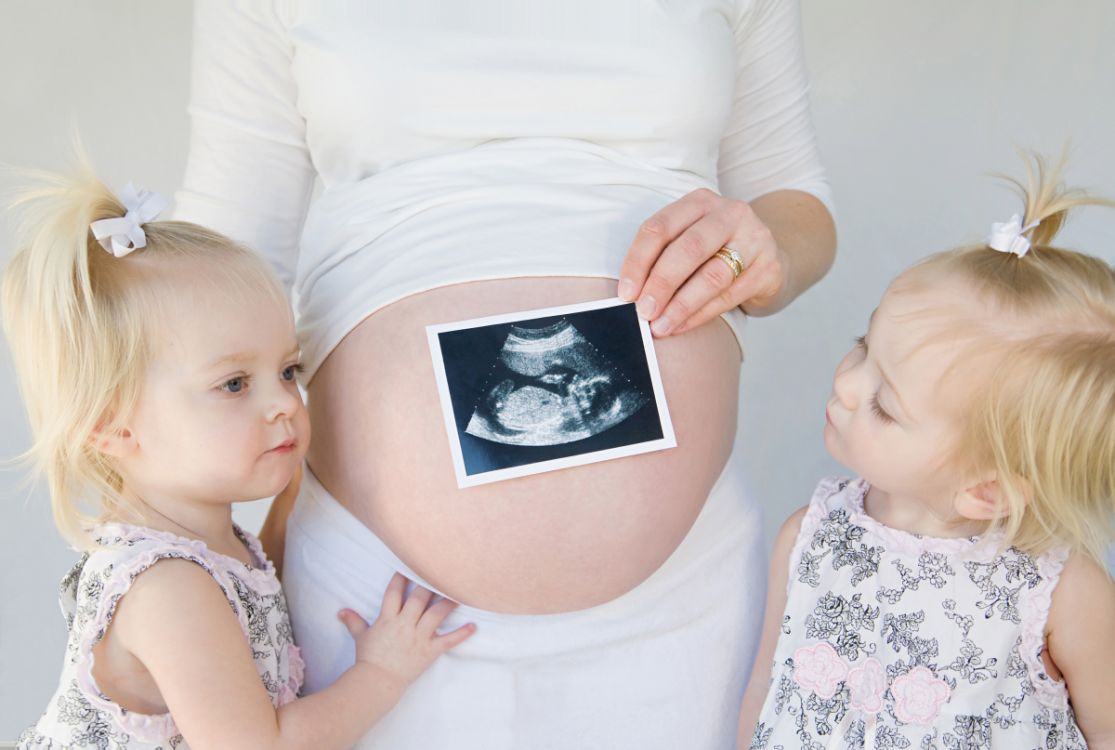 The fascinating and diverse world of twin pregnancy

From Apollo and Artemis to Beyoncé’s twins Rumi and Sir Carter, we have always been fascinated by twins. But do we really know how identical twins are formed? And are there only two different kinds of twins? Here we summarise our recent paper on this subject and answer these questions and more.

*Please note, this article reflects a scientific and medical perspective on the many different and rare twin types and occurrences. If you are expecting twins and the article causes concern, please speak to your doctor or specialist who can answer your specific questions.

Fission or fusion? A split decision

Twins can be either fraternal (non-identical) or identical. Fraternal twins result when two eggs from the same mother are each fertilised by a different sperm from the same father. Each twin has its own placenta, and during pregnancy the twins develop side-by-side. Like any brothers or sisters, fraternal twins share about half their genetic make-up, from having the same parents.

Identical twins occur when one egg is fertilised by one sperm, and then divides and splits within two weeks of conception. The later the split, the more likely identical twins are to share structures such as the placenta (two thirds of identical twins) and the inner sac (1% of identical twins, also known as ‘MoMo', the only twins who can touch each other in the womb).

Or so we are told.

Actually, no one has ever seen identical twins being formed under a microscope, so we don’t know for sure what really happens or when. Indeed, there is an alternative hypothesis that all identical twins split very early (at the two-cell stage) with a proportion then fusing back together within a few days.

While we now have clues as to why fraternal twins may run in families, we know very little about the factors influencing the formation of identical twins.

All twins that share a placenta have connections between their blood supplies, which means that they are likely to swap at least a few blood cells. This makes each of them ‘chimaeric’. This word comes from the chimaera – a beast in ancient Greek mythology that had the head of a lion, the body of a goat and the tail of a snake.

We can’t usually detect the cells from one twin within the other after they are born because the mixed cells are genetically identical. However, a not-so-rare exception to the rule occurs when the outer “shell” of fraternal twins fuses early in pregnancy, resulting in a single, shared placenta later in development. Such twins can also share blood, but this time, the mixed cells are genetically different and this can be easily measured.

We’ve known from years of twin research that not all identical twins look identical and not all fraternal twins look different. Twins and their families know this too. Only a genetic fingerprint test can reliably tell whether twins are fraternal or identical. We also know that sometimes genetic differences can arise within pairs of identical twins, meaning that many twins may not be truly 100% genetically identical.

As many as one quarter of identical twins can have features that are mirror-images of each other. Despite years of research, it is not clear why and how this occurs. It’s been suggested that such twins may split later than non-mirrored twins but there is no evidence to back up this theory.

Some pregnancies start out as twin pregnancies but end up as singleton pregnancies, with one twin appearing to ‘vanish’ along the way. One in five IVF pregnancies that are tracked by ultrasound from the start become singletons by the end of the first trimester.

Twins can also ‘vanish’ in non-IVF pregnancies, but we don’t know why. Most likely the twin vanishes due to a developmental problem.

If a twin vanishes in the first trimester there is rarely any impact on the remaining twin. However, when a twin is lost in the second or third trimester there may be significant consequences for the surviving twin.

In around one in 200 twin pregnancies, one twin may not completely disappear but may just fade to a tiny paper-like twin.

One in 200,000 twins are born fused together or ‘conjoined’, with notable examples being Chang and Eng Bunker and Abby and Brittany Hensel. Again, we are unsure how conjoined twins form. It could be by fusion of cells in very early pregnancy or by incomplete splitting of the embryo in the early stages of pregnancy.

Even rarer is the situation where one twin is completely contained within the body of another. In this so-called fetus-in-fetu, a much smaller, much less well developed ‘twin’ is detected after a presumed singleton is found to have a swelling, often in their abdomen. These inner ‘twins’ are not like living, conjoined twins but are rather groups of tissues from a second twin that didn’t properly develop, and they can be removed by surgery.

Finally, we know that twins may not always form at the same time. Sometimes, fertilisation events can happen at different times, from sexual intercourse with the same or even different partners. Most of these events go unnoticed, except when there are obvious racial differences between fathers.

Twins: valuable and fascinating but still a mystery

The last few decades have seen an explosion in our knowledge about twins and twinning and this has helped us understand events that may occur in both multiple and singleton pregnancies. We have witnessed a dramatic increase in the knowledge that results from when twins, and parents of twins, volunteer for research studies. But twins retain an aura of mystery and still have many more secrets to reveal.

This article is based on a research paper – published in the American Journal of Obstetrics and Gynaecology - by Jeff Craig, Helen McNamara, Stefan Kane and Mark Umstad. Read the full free-access paper with comprehensive diagrams of the many different types of twinning here: https://www.researchgate.net/publication/283516837_A_review_of_the_mechanisms_and_evidence_for_typical_and_atypical_twinning

If you have any comments or questions, please email us at This email address is being protected from spambots. You need JavaScript enabled to view it. 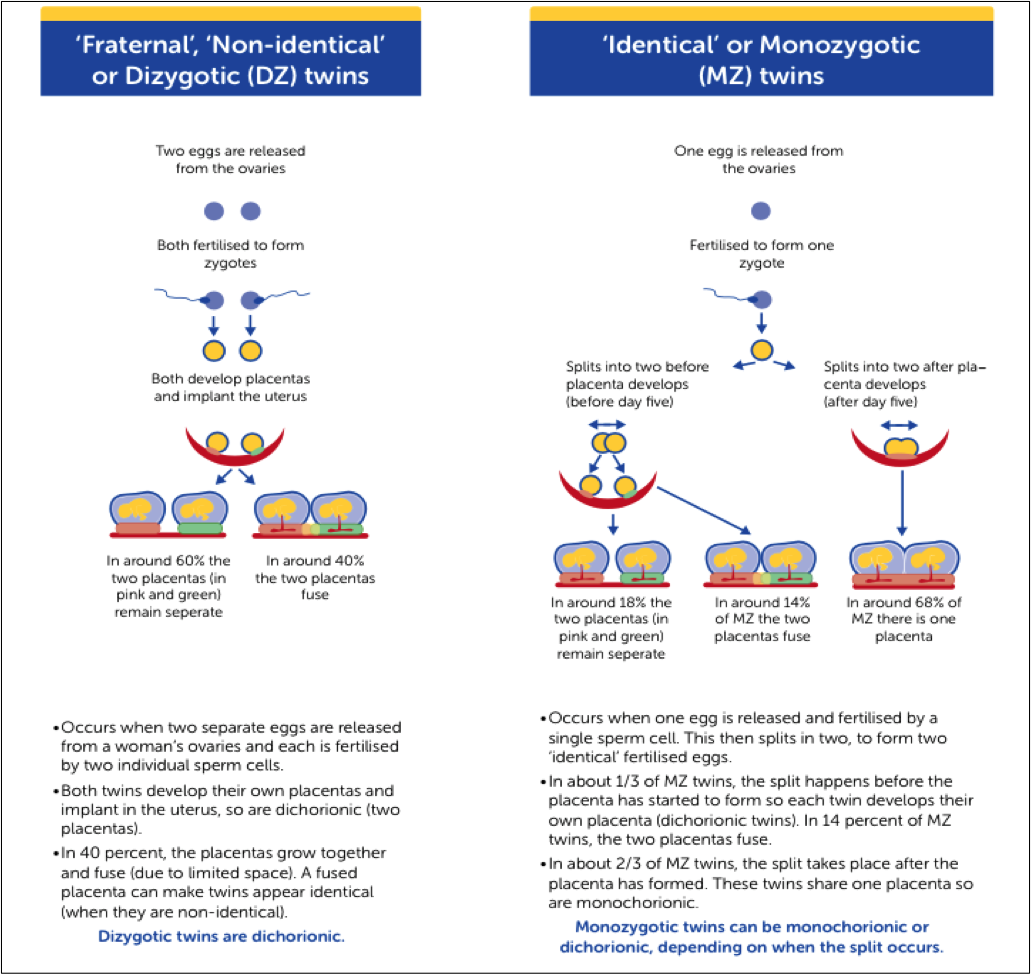